In just a couple days we will have been on the road in our wheel estate for three months. Our Pace Arrow motorhome has been running strong, not missing a beat until just a few days ago when it began what I called, "hiccupping" every once in awhile. Each time it happened my heart nearly stopped from fear that we were breaking down. Phil assured me it was nothing serious and the motorhome would continue to run in spite of this problem (which it did). I tried to relax but the third day after trying high-octane gasoline (that helped for a few hours) it started coughing again so we decided we must find an RV garage. We belong to an RV camping club called "Passport America" http://www.passportamerica.com/ and while looking through it on 2-21-05 for campground possibilities in the greater San Antonio area, we found an ad for Pro-Tech RV Service http://www.protechrv.com in Seguin, Texas. We were very interested because they have RV sites behind their service building where you are allowed to stay free of charge while they work on your rig. Phil called and made an appointment for Thursday and told them we'd be arriving Wednesday afternoon. We had several things we needed done: lube, oil and filter; one hydraulic jack that refused to come down and of course, the disconcerting hiccup that needed to be diagnosed and repaired. Phil was sure it was a carburetion problem and at first the mechanic agreed when they went for a test ride but then on second thought, he decided it was an electrical problem. To make a long story short, Pro-Tech mechanic, Larry fixed our jack (loose wire and low on fluid) before the day ended on Wednesday then early Thursday he completed the L.O.F. and tried to decide what was making the engine act up. After some discussion, Phil agreed to the suggested tune-up, plug wires, distributor cap and rotor so Pro-Tech ordered the parts needed (to be delivered the next day) and we settled in for another night. We were up early the next morning and by 10:30 AM our motorhome aced the test ride, our bill was paid-in-full ($718.36) and we were on the road again. Phil and I have nothing but praise for the professionalism, expertise and friendliness of Pro-Tech RV Service! They kept us in the loop at all times and we quickly trusted them completely. Several long-time and local customers gave glowing testimonials about Pro-Tech RV Service as they brought their rigs in for various services while we were there.
We will be in Seguin for a week and take day trips (35 miles) into San Antonio ... starting now because the rain has stopped ... at least for a few days.
Oh yes, today is the anniversary of the day Phil and I met (at a Jerry Lee Lewis concert) in Tumwater, WA. ... 20 years ago!
Posted by Joy and Phil at 8:20 AM No comments:

Coming into the "Hill Country" of Texas on I-10 East. 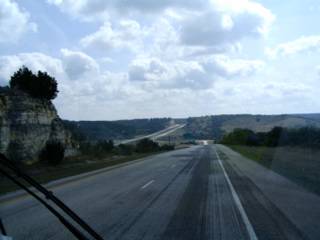 Our light at the end of the tunnel. 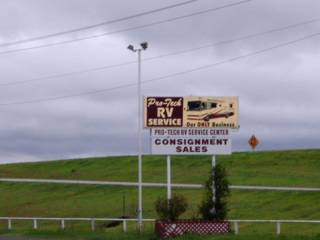 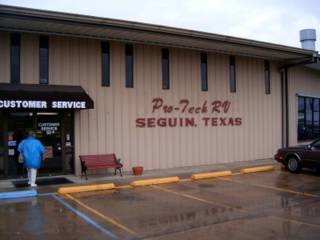 Our Pace waiting patiently for the motorhome doctor to figure out just exactly what is wrong with her. 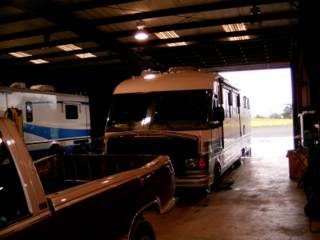 Our new friends, David and Aurora from Florida. Newlyweds traveling across country with their cat, Romeo. 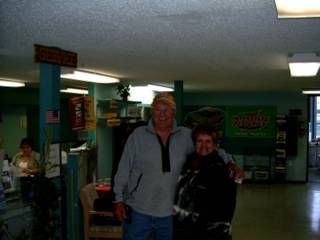 Our "hero", Larry the mechanic at Pro-Tech RV Service in Seguin, Texas. 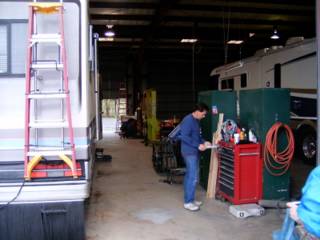 Heading east into the "Hill Country" of Texas. 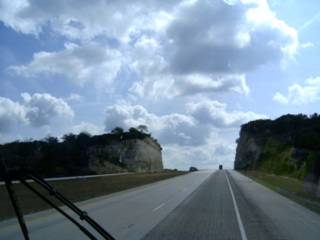 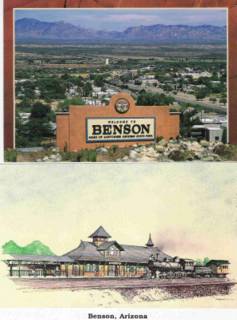 It's been 48 years (1958) since I last traveled through the state of Texas. Phil has never been here. It's an understatement to say I'm thrilled at long last to be back because we both have family to visit in this state; some we've met and other's I've only been privileged to meet through correspondence. That said, I have a couple observations to share ... my opinion only, with just the first 450 miles logged and many more miles to come before we leave. In all our travels through Arizona we were in awe of the desert. This wet winter has transformed the vista in all directions into a veritable Garden of Eden and, as you know, I have commented many times over about how beautiful we found it to be. Well, those of you who are reading the blog regularly may remember my editorial about the Joshua Trees back in CA and unfortunately, (remember, this is my opinion) the same applies here. The southern desert of new Mexico and Texas along Highway 10 is nondescript ... a few interesting mesas off in the distance, some cattle and a few horses as well as some impressive geological observations where the DOT cut the highway through the crest of hills and exposed the layers of earth but for the most part ... not much to see. The little towns we've stayed in have been a welcome respite from the monotonous landscape but I can see where without these stops, south Texas wouldn't leave much of an impression on the hurried traveler. Again, I am so thankful to have this opportunity to slow down, observe and investigate as we move across this wonderful country of ours. On to San Antonio today!
Posted by Joy and Phil at 6:30 AM 1 comment:

Junction, TX KOA campground. That's the Pace Arrow and the Ranger in the middle under one of the dozens of huge Pecan trees in the park. Management says during the "season" please limit your nut gathering to one quart. 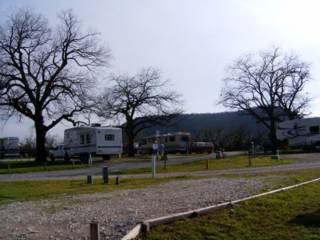 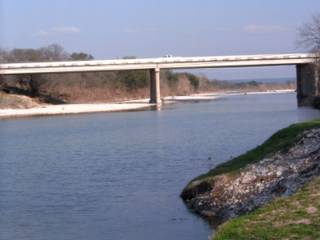 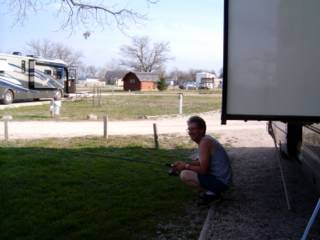 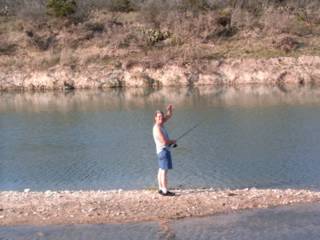 Just a couple of the Nascar racing team 18 wheelers we passed heading west. There must have been over 50 of them, many accompanied by beautiful motorhomes painted to match coming from the Daytona 500. 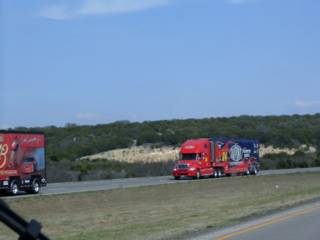 As you can see, the ground isn't ALL flat in Texas. 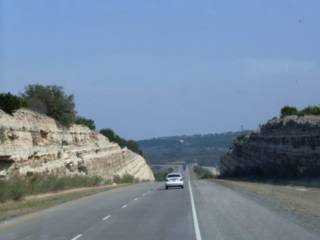 I'm really grabbing at straws here ... looking for something interesting to photograph ... ha! 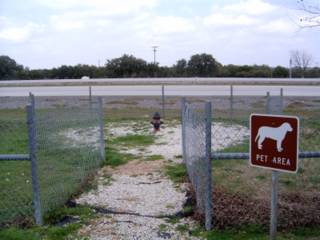 Sorry about the fuzzy photo but look closely and you will see giant wind generators, just seven of thousands along Interstate 10 east just before Bakersfield, TX. Very impressive. 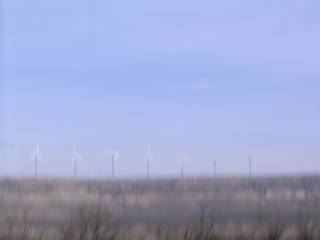 We arrived in Ft. Stockton, TX about 1 PM yesterday. Parkview RV Park (a Passport America park, only $9 a night) was nearly empty but by bedtime, quite a few rigs had pulled in and set up for the night. I couldn't get a picture because it was too dark, but the view to the west was spectacular last night. The town is five miles long, spread out along the I-10 business corridor and from our park (which must be at a higher elevation but that fact is not obvious), we could see it from end to end and all the lights were sparkling and it was really pretty. After getting set up we went in to town to find some lunch then we went exploring. We found a very interesting museum, the remains of the original Ft. Stockton and several other historic spots. At about 7,000 population, this is the perfect size town to rattle around in ... no chance of getting lost and very light traffic! Longer day today ... all the way to Junction, about 200 miles.
Posted by Joy and Phil at 7:20 AM No comments: 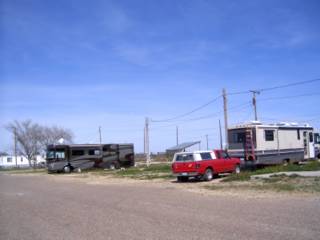 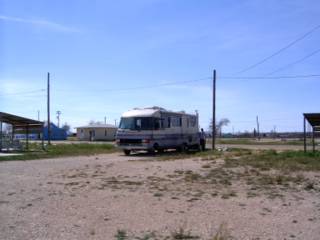 Watch for ice? When? They've got to be kidding! 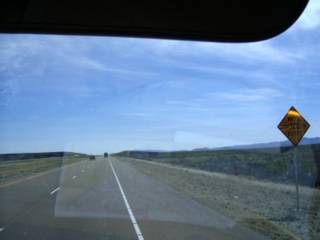 Traveling east on I-10 the panorama flattens out. 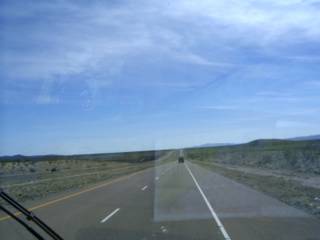 Interesting landscape along I-10 East between Van Horn and Ft. Stockton, TX. 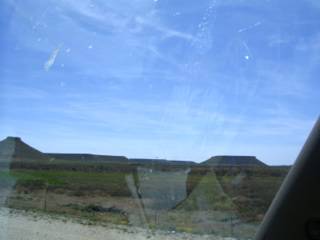 Introduction to Wildlife World Zoo in Phoenix with talking Macaw. 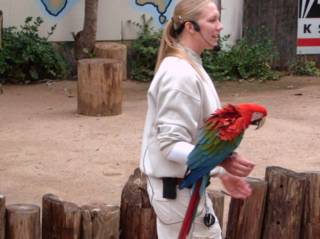 One of three black swans wandering around loose. 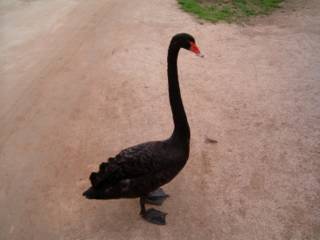 Can't remember what these cute little guys were called but he was on top of the rock watching out for danger. 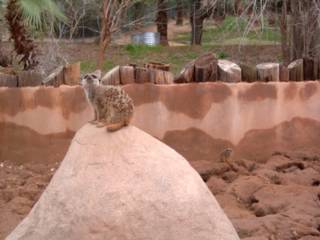 Giraffe stretching his neck for food. 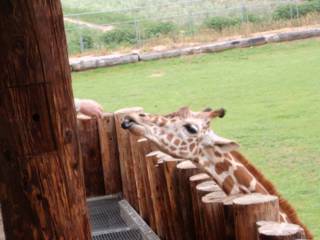