Jessica and her baby girl, Skylie back from a short four-wheeler ride before dinner. 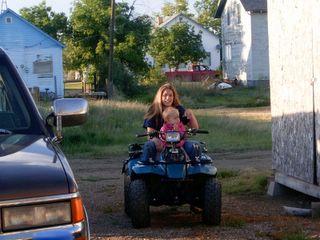 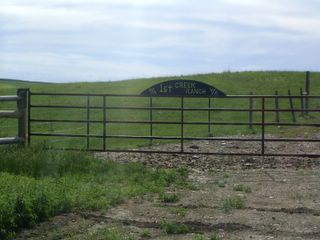 This is the main street of Saco Montana. Add the school, four churches and the post office and that's all there is folks. 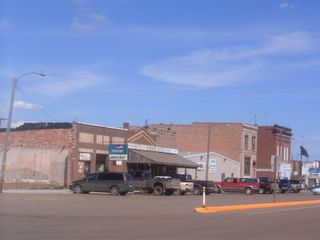 L-R: Phil, Les, Gloria and Donald in the spa at our RV park in Malta, MT. Joy stayed dry and took the picture. 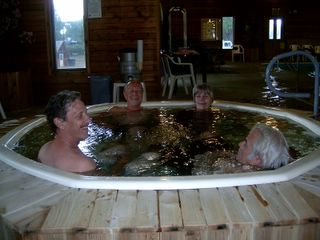 Hindsight: In Helena Montana, there is a beautiful carousel and Phil finally found a big fish ... one big enough to ride. Sadly, my pictures of Les and Gloria riding were accidentally deleted ... boo hoo! 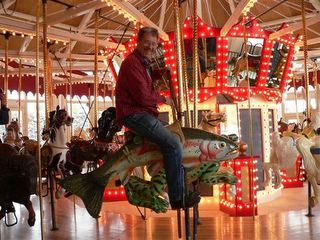 We are complete! The four of us are now six and we’re ready to continue our travels along the blue roads of America. The third couple and their motorhome caught up to us here in Malta on Friday afternoon and their arrival was cause for celebration. Don and Ardella, our dear friends from Arizona have joined the caravan and are rearing to go. We will leave on Tuesday morning for North Dakota, then turn south to South Dakota. That’s they way we will operate on this, our great adventure. No ironclad itinerary, no reservations farther out than a day or two except for holidays and flexibility always. Our plans to bypass South Dakota were immediately changed when we learned Don wanted to see Mt. Rushmore. From there, who knows? Our ONLY agenda is to be in New England for the fall colors. Beyond that, we will make it up as we go along

Gloria came up with decorating the reserved space at the RV park. 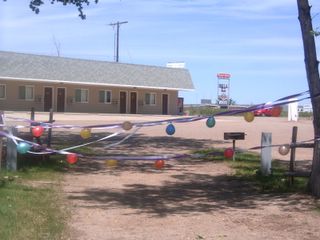 Yeah! Here they come. Les and Phil are out on the road to wave them in! 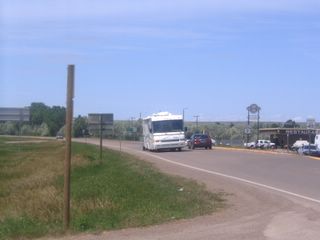 Pulling their rig into the spot we had reserved for them. 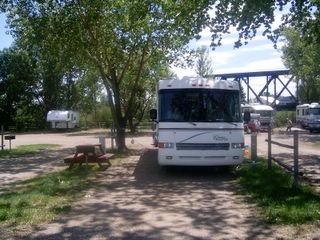 Early one afternoon we looked out our front window and saw the entire "tent area" of our RV park covered with small tents and each tent had a bicycle or two beside it. There was much hustle and bustle going on in the tiny "tent city" and as the day progressed, my curiosity got the best of me. Phil and I walked over to talk to them and discovered they were a group called "Adventure Cycling" out of Missoula, Mt (800.755.2453) and they were just beginning a major trip across the USA called the "Northern Tier 2005". They pulled into Malta early on this day because "... we've done our 40 miles today" (they had a brisk tail wind) and welcomed a chance for showers and rest. The tour leader, Bill gave me his card. Along with the pertinent information, it proclaims ... "The Road Called. We Ventured Forth." Well, the same goes for us but we're doing it the easy way in comparison. We salute you!
Posted by Joy and Phil at 9:20 AM 1 comment:

Adventure Cycling leader, Bill, telling Joy about this "Northern Tier 2005" trip from Anacortes, WA to Bar Harbor, Maine. We were as curious about their adventure as they were about ours. At our age, it seems to be the "hard way" to go but of course, "to each his own" as they say. 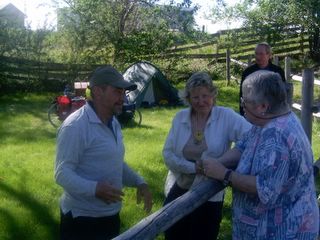 Joy visiting with a fascinating English lady who, with her husband has cycled nearly around the world. Wow! 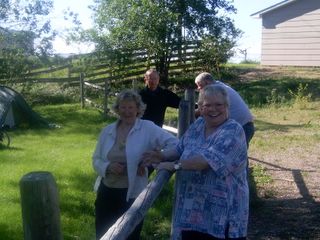 Cycling team members watching and photographing the train going by the campground. 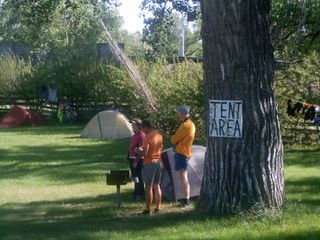 Burlington Northern freight train going by the "tent area" at our RV park. 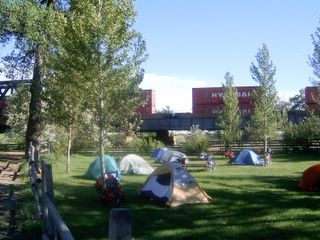 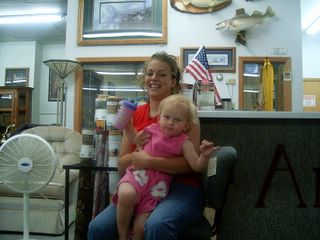 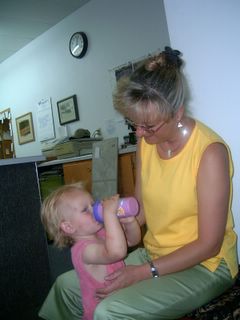 Cindy and Joy in Malta Montana. 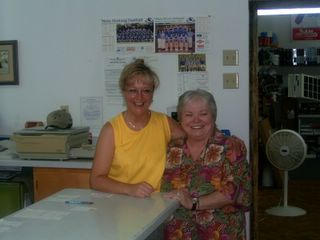 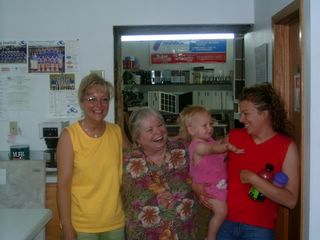 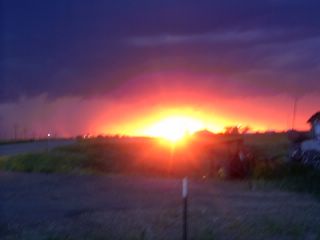 Malta Montana sunset with a little lightning on the side. A sign of the major storm that was on the way. Sorry, no good pics of the storm ... too dark. 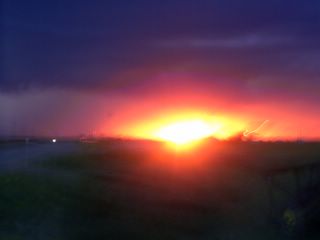 I'll try this again. Tried to write yesterday and lost the I-net mid sentence ... we'll see if we have a more stable connection today.
We arrived in Malta Tuesday afternoon after a pleasant and uneventful drive north from White Sulphur Springs. Our RV park is on the Milk River and just beside the railroad trestle that crosses the river so we are contending with Amtrak, freight trains and their horns all night long. This is one of only two parks in the area and after checking the other one out, we decided we could live with the train noise for a few days.
After three years of waiting, Gloria finally got to see her favorite dinosaur, Leonardo. Montana is the premium location for dinosaur fossil digs and Malta has a excellent museum as well as a field station where we were led on a wonderful tour (Thank you Rhonda!) around the facility where they "clean the bones" and reassemble the pieces. Absolutely fascinating!
We went to see Cindy at her work here in Malta yesterday. She works at Art's Furniture Store. I have been Cindy's "second Mom" since she was three years old and I started taking care of her while her mom worked. She is the same age as my daughter, Violet and fit into our family like one of my own ever since.
Her daughter, Jessie and granddaughter Skylie (18 months) came down from the ranch where her husband Ryan works north of Whitewater to see us and her youngest boy, Tim called while we were there at the store to tell us he is on his way from Vancouver, WA today and to expect him tonight because he's driving straight through. So ... tomorrow we're planning a BBQ at their house in Saco, about 27 miles east.
Gloria, Les, Phil and I drove out to Saco after dinner last night to see Cindy's house, visit with her and her husband Ron then on the way home, we got caught in a major storm that was moving north out of the southwest. At Gloria's insistence, Les turned around and drove us back into town, parked next to an old abandoned gas station and we sat it out. That was a good call by Gloria because thunder, lightning, torrential rain and wind blowing sideways pummeled the car for about half an hour while the storm raged across the prairie. It was both frightening and exciting at the same time to watch the power of Mother Nature and realize just how helpless and insignificant we really are.
We tried to take some pictures just before it started and I haven't checked them yet to see what we got. The lightning was spectator and like nothing I've ever seen before, except once over thirty years ago in Memphis, TN when I witnessed an spectacular electrical storm and it rained so hard, the street looked like a river when it was over. Anyway, I'd just as soon not go through one of them again anytime soon.
Phil and Les are waiting for some calmer weather to go fishing. It's really windy today but it's a lot cooler because of it. Yesterday, in the "calm before the storm", the temperature topped out around 95' ... Just a bit too warm for me!
Posted by Joy and Phil at 10:29 AM 1 comment:

Our boat, "The Pirogue", (the one on the left) awaits us for boarding at "Gates of the Mountains" Cruises Marina on the Missouri River NE of Helena, Montana. 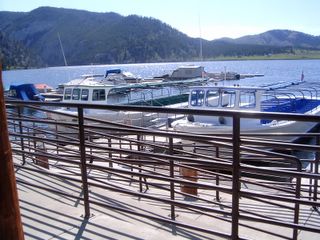 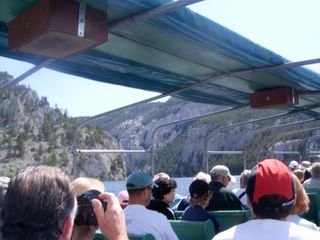 Named by Lewis and Clark. 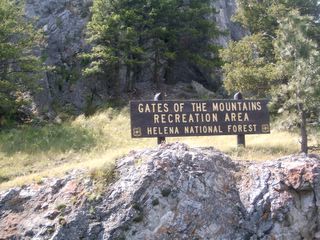 See the "Gate" up ahead? 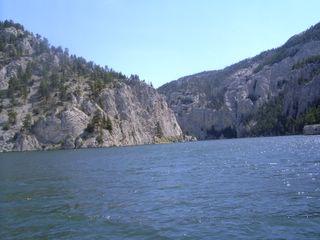 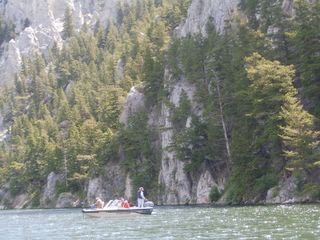 Breathtakingly beautiful and almost exactly as the Lewis and Clark Expedition viewed it 200 years ago. 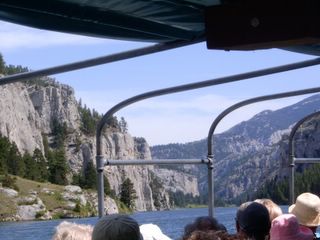 Mule deer alongside the Missouri River. 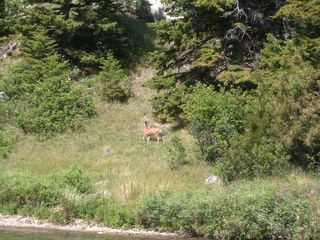