It looks like we might have found a technician to solve our satellite TV dilemma. I’ll keep you posted. We found a nice coin-op laundromat yesterday and got our laundry done. I must admit one of my idiosyncrasies as far back as I can remember has been my near fanatical laundry methods … in other words, I acknowledge I was obsessive compulsive in the way it was accomplished. Meticulous sorting and pre-treating, precise cold water washes and permanent press care as well as extreme self-satisfaction in my whites being their very whitest and so on. Well, it’s fair to say that using public facilities has challenged my routine and caused me to rethink my behavior. It has been necessary to condense the steps and relax my so-called system and as a result our laundry day usually takes less than two hours start to finish. Who knows, maybe one day I’ll be able to relinquish the entire chore to Phil … ya think?
Posted by Joy and Phil at 7:00 PM No comments:

Our tour guide, John Goff giving us the background of "Salem 1620: Pioneer Village". The restored village was opened in 1930 on the actual site where the "Purists" landed and is now 75 years old. It is America's oldest known Living HIstory Museum. Salem Preservation Inc., a non-profit preservation organization working with the City of Salem MA to preserve, restore and appropriately re-use this property. 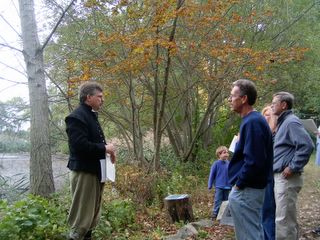 Phil volunteered to be restrained in the "pillory" where the offender's hands and head are restrained. Very uncomfortable. The "stocks" in front allowed the prisoner to sit on a narrow board, while his legs were pinned through the holes. 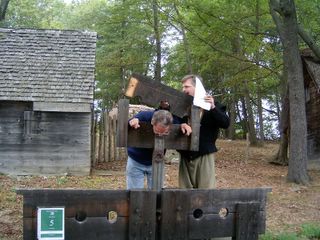 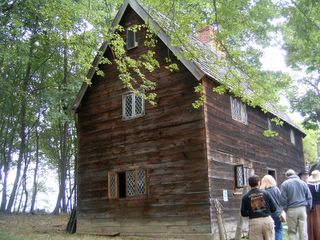 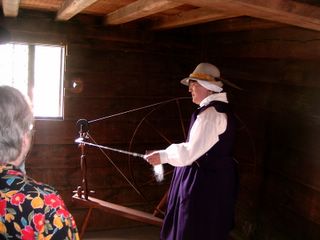 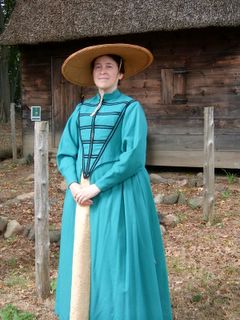 Short, blunt-end "Pike Pole" demonstration. Actual "Pikes" are 18 feet long, weigh about 20 lbs. and have a long sharp blade on the end. "Modern day" pikes are the bayonets that fit on the end of a rifle and are still used today. 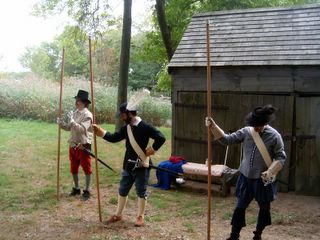 Sword and dagger demonstration. Something I've never given any thought to and it was absolutely fascinating. We were told the moves are choreographed in ancient manuals and often compared to a chess game. 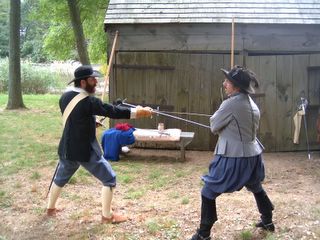 Beautiful building standing high on the hill above the harbor. 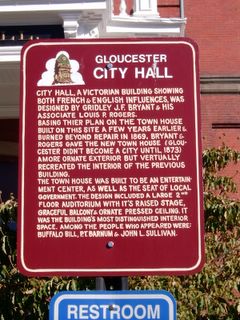 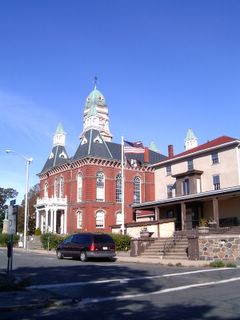 Magnificent five-story tower on a huge house sitting on the hill in Gloucester, MA. What a story this house could tell and what a view they must have from the top floor! 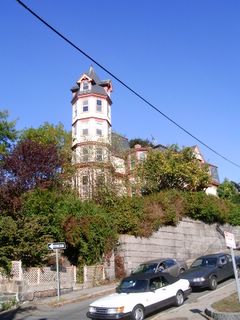 Jetty out into the Atlantic Ocean along highway 1-A in northern MA near the NH border. Lots of fisherman can be seen trying their luck on this beautiful sunny day. 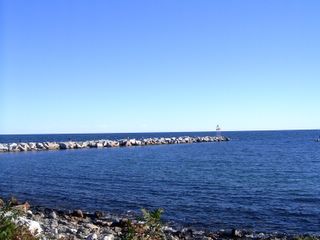 Draw bridge opening to allow a sailboat through. 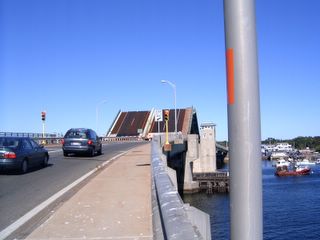 Phil and I have determined that THIS is how the other half lives! Stunningly beautiful, palatial homes along highway 1-A. 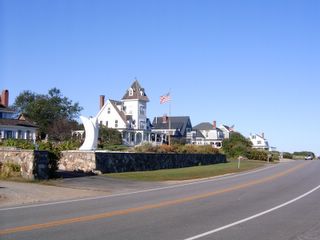 Congregational Church in Dover-Foxcroft ME. These beautiful examples of 19th century architecture fascinate me and I look for them everywhere we go exploring. 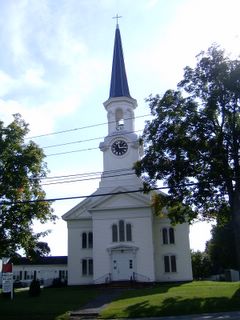 Pumpkins for sale near Bangor ME. The harvest must have been good this year as there seems to be no shortage of roadside sellers. These were $3.50 each ... any size. 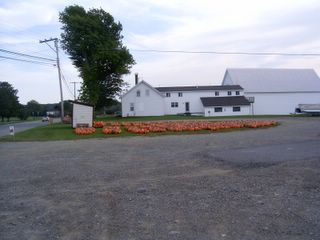 Our time in Maine is almost over. We have one more day to explore then we will be moving down the coast to the northernmost village in the state called Salisbury in Massachusetts. Our traveling companions, Gloria, Les, Don and Ardella will be heading back toward the White Mountains in New Hampshire for a couple weeks to make sure they are in the thick of things when the leaves change color. Phil and I are going to stay nearer the coastal regions and enjoy the colors from that prospective. If we are able to coordinate our plans, we’ll most likely join up again in a few weeks a bit farther south.

The weather here around Bangor has been uncooperative to say the least with lots of low-lying fog, considerable cloud cover (= no satellite connection), some serious wind gusts the last couple days and lots of precipitation, in all stages from sprinkles to downpour. The few days (including today) the sun came out it was warm and somewhat humid but we managed to see some very beautiful countryside. To Phil and I, Maine is very similar to Washington State minus the tall evergreen trees. The evergreens in Maine are mostly Pine and Spruce but the majority of trees are deciduous, hence the brilliant leaf color across every hill and dale in the autumn which begins this coming Thursday, the 22nd of September.

Life size bronze of Moose in Rockland Maine. So far, the only one we've seen around here. 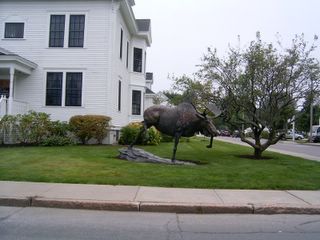 Rockland Maine. I lived here with my first husband and my year old son, Shawn for a few months in 1956. 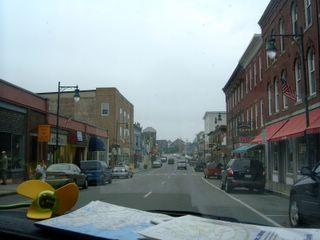 The pier in Rockland where I worked in a sardine packing plant (long gone) in 1956. 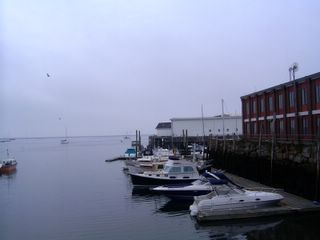 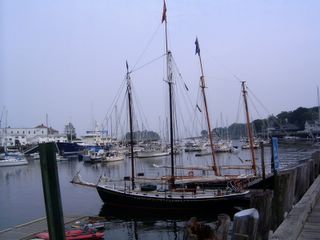 Overgrown trees partially block the view on this rainy day of the state capital building in Augusta Maine. 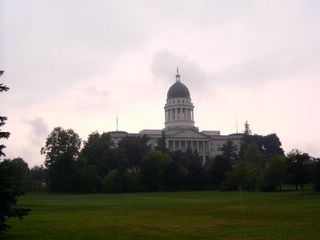 The 29 foot pontoon boat where Captain "Buddy" entertained and informed us on a two hour tour of Squam Lake near Holderness NH. 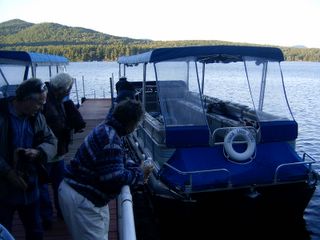 Squam Lake near Holderness NH was the location for the movie "On Golden Pond" in 1981. This is "Purgatory Cove" where Norman (played by Henry Fonda) wrecked his boat and his wife, (played by Kathryn Hepburn) found and rescued him. It's not nearly as sinister looking in the bright of day. 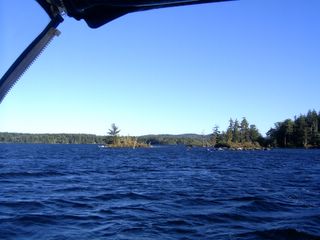 In an article written in 2003, Chris Martin, an Audobon Society's Senior Biologist reported that bald eagles returned to Little Loon Island in Squam Lake after 70+ years. This is the nest where they raised two chicks in 2005. 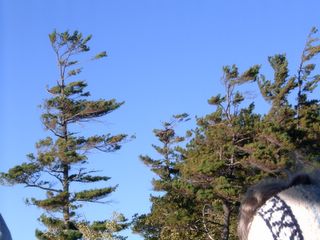 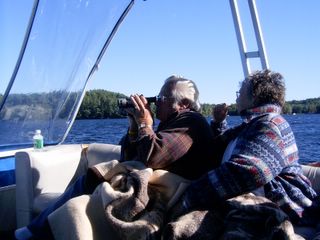 I received a note from a new reader. He kindly pointed out that I have made an error in the blog and I will make my correction at this time and apologize for my mistake! Back around August 25th, I posted pictures of our play day at Circus World Museum and said it was in Baraboo Illinois. Actually, it is in Baraboo WISCONSIN and I thank you Howard for your sharp editing. Even my sweetheart, "eagle eye" Phil (who usually catches my boo-boos). missed that one.
Posted by Joy and Phil at 5:35 PM No comments:

Aaaaaah! New England in September! The locals have told us that this is the VERY best time of year. Warm days, cool nights and the tantalizing promise of breathtaking, spectacular color across the landscape at the dawn of each new day. Only two more of these beautiful days here in New Hampshire then on Tuesday, we will drive north to Bangor, Maine for “more of the same” we hear … maybe even warmer. According to the local meteorologists on TV, category 1 hurricane/tropical storm Ophelia, that’s slowly moving up the east coast could brush the outer banks of Cape Cod by Friday. Fortunately, we will be farther north and with luck out of harms way if that actually happens.

After 22 years of reminiscing about my last visit to New England, I have been surprised and somewhat mystified by the difference between my “memory” and what is real … at least so far. These past years, I have been willingly charmed by my recollections of Vermont being a green, pastoral state with a stand of deciduous trees here and there among the quaint and picturesque villages, each with at least one tall white church spire soaring into the blue sky. I remembered an agricultural state with a proliferation of dairy cows, grazing peacefully in acres of green meadows around every turn.

Well, for sure there is some of that along the western side of the state in the Lake Champlain valley of Vermont but I was totally surprised by the spiny ridge of heavily wooded mountains that runs down the middle of the state. Tree covered foothills spread out in all directions making narrow, winding secondary roads the rule (at least along our route) rather than the exception. Way back then, I often remarked I would happily move to Vermont if there were any way for my husband (shortly thereafter, he became my "ex", but not because of his refusal to move to Vermont ;-) to earn a living. At the time, he had a very lucrative job in Anchorage Alaska and did not share my feelings, so the move was never seriously considered. I subscribed to “Vermont” magazine for a year and got my “fix” each month when the new issue arrived. Three weeks ago, when I was at last reunited with my “favorite state”, was I surprised? Yes, very much so and as my bubble burst, I was forced to change my way of thinking about Vermont and then New Hampshire as well. Don’t misunderstand me, I will always have a soft spot in my heart for this beautiful area but in retrospect I will always be amazed how different my memories were from the reality.

Lake Champlain with the bridge to Vermont in the distance from our campground in Port Henry NY. What a view! 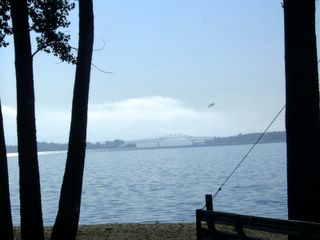