We just found out that one of our good friends (and a loyal reader of our blog) went in for an angiogram and ended up having stints put in two of the arteries of his heart. This all started when he went in for a treadmill stress test in August and the cardiologist stopped the test midway after seeing some abnormal results. Up until that time, our friend had no symptoms; can you believe it? His main artery was blocked 98% and the other artery was 90% blocked. The doctors told him they found two more that would need stints later because they are 70% blocked. This happened on Monday, the 27th, that just happens to be our birthday—yes, Phil and I share the same birthday.

Therefore … this is a message to you Mr. Andy. GET WELL SOON!!! We expect you to be bright eyed and bushy tailed by the time we arrive for our yearly medical appointments next spring. We hear some “31” card games calling our name! 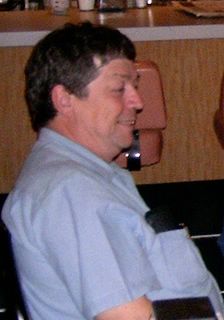 HAPPY THANKSGIVING DAY! I'M COUNTING ALL THE THINGS WE HAVE TO BE THANKFUL FOR, HOW ABOUT YOU?
Posted by Joy and Phil at 9:01 AM No comments:

We’ve only been in Yuma for ten days but we have felt like we’re home from day one. This town is so RV/Retiree friendly; every place we look, everywhere we go, we see couples that look just like us … our peers if you will. No one is taken aback by the fact that we are full time RVers and travel in our motorhome according to our whims or that our plans are carved in Jell-O. It is a very comfortable place to be. The danger of course, is getting too comfortable … however, the gypsy in my soul is alive and well. I know that sooner rather than later we will develop “Hitchitch” (www.hitchitch.com) as it’s known in our circles or itchy feet (wanderlust) to non-rvers.

Yuma celebrated the “Colorado River Crossing Balloon Festival 2006” this past weekend. Events were scheduled Friday, Saturday and Sunday and we managed to get up early enough on Sunday morning to be at the Cibola High School athletic field for lift off. We missed the big event on Saturday where they actually sent 35 balloons into the sky. Unfortunately, on Sunday the wind was a bit strong and only three of the many balloons in attendance managed to get up. It was very much like, “hurry up and wait” as the Yuma Proving Ground (U.S. Army) portable weather station was on hand advising the balloon pilots about conditions in the flight path. Obviously, the three balloons that did lift off warned the others by radio that it was pretty hairy so the waiting teams deflated their envelopes and we went home a bit disappointed. There were hundreds of people positioned around the field watching, all ages, shapes and sizes and it was a "people watching", entertaining experience. 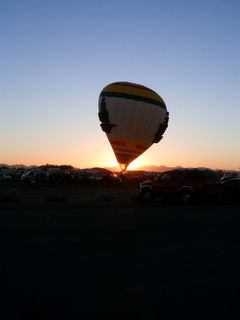 The sun is coming up! 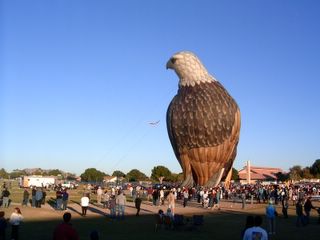 The symbol of America, the bald eagle balloon raised the flag for the Star Spangled Banner at sunrise. 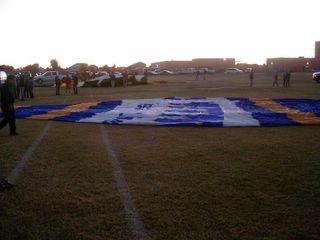 The envelope spread out and ready to be filled. 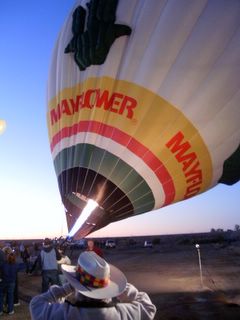 Fire up the propane torch boys! 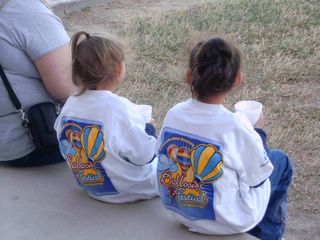 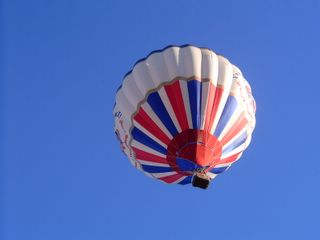 We could almost reach up and touch this gondola as they flew over our heads. 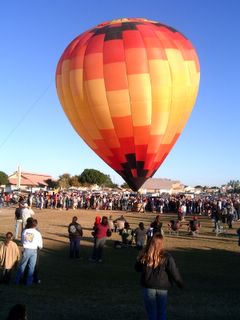 This beauty didn't get to fly and had to be deflated due to a malfunction of one of the flaps. 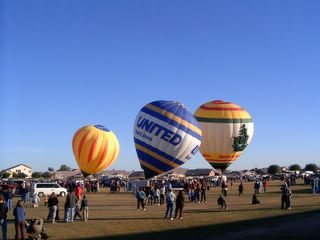 These three balloons didn't get off the ground due to unsatisfactory wind conditions. 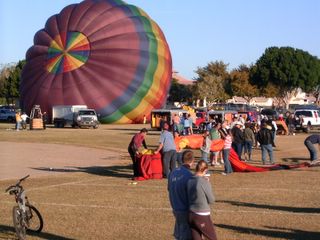 People are scrambling to get out of the way as a big fan inflates the envelope with air. 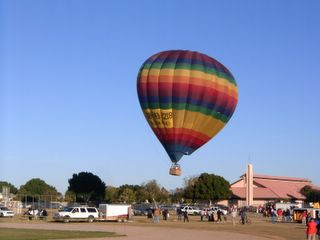 We have lift off! 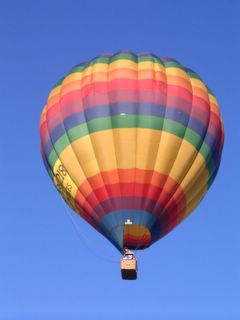 This balloon is for rent ... hmmm?

After pursuing the scenic route for more than two months on the road, we have arrived in Yuma Arizona from Shelton Washington and are settling in for a couple months. The tentative plan is to stay through December visiting family and basking in the warm weather.
Home building is booming in Yuma. The town continues to spread out and although the population decreases during the hottest summer months, apparently, there are many more year-round inhabitants each year. Several residents we’ve talked to consider two months of hot weather (easy to survive with air-conditioning) a small price to pay for 10 months of nearly perfect temperatures.
Posted by Joy and Phil at 11:21 AM 1 comment: 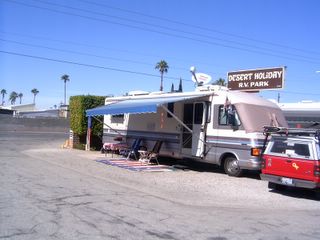 Our little corner of the park. Not too roomy but we don't need much. 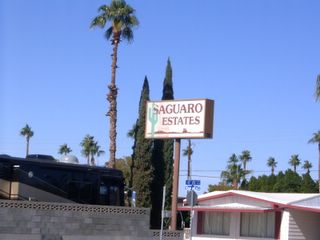 Where my Aunt Elaine spends the winter. 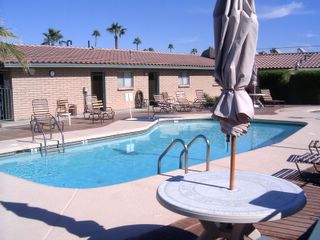 The pool and jacuzzi directly across the street.

Today is a lazy day. For me, that’s the very best kind. This is our last day in Quartzsite, Arizona … tomorrow we will continue south to Yuma, only a little over 100 miles, another short, easy day. The thermometer read 85 degrees outside this morning but with the roof air conditioner running and the door open, it was decadently wonderful inside Penny the Pace as I wrote these words earlier. (I would have posted to the blog then but poor Blogger was having a problem.) Wasteful? I always feel a little bit guilty when we do that BUT after seeing the wattage being burned in Las Vegas 24/7, the electricity we use my friends is but a blink of a gnats eye in the overall electric usage in this part of the country.

While we were in Las Vegas, after the worst of our colds had passed, my cousin Buster did his best to show us miles and miles of the newest sights in and around Sin City. The rapid growth and enormous amounts of money being spent for housing are beyond our small town imaginations. Downtown, older casinos are coming down (the Stardust closed while we were there) and new casinos are going up. I heard someone on TV call the abundant construction cranes spread out across the landscape, the “state bird” of Nevada, and had to laugh. Buster took us to the Lake Mead Marina where we saw thousands of wild carp being hand fed popcorn by children at dockside and to Lake Las Vegas where million dollar homes surround the little oasis out in the desert. We learned this is where Celine Dion owns a home and that she flies to work by helicopter at Caesar’s Palace every night.

We went to see the “BODIES” exhibition at the Tropicana Casino. What an experience that was and I thoroughly enjoyed it. Phil was less enthusiastic but managed to find a few exhibits that interested him. The hall was full of children who liked seeing these specimens as much as the adults. I suppose it’s not for everyone but I highly recommend it to anyone even mildly curious about the human body.

To top off our visit, we went to the “Fremont Street Experience” on Sunday night. WOW! Two blocks at the end of Fremont Street have been closed to traffic and renovated into a pedestrian plaza. A huge canopy covers the entire two blocks and after dark they turn off all the lights of the Casinos and for about ten minutes, run a neck-craning spectacular laser show complete with eardrum pounding sound effects and music. A new show plays about every hour and we saw two of them. My cousin told us that downtown Las Vegas was suffering from lack of interest and this is the city father’s attempt to redirect that downward spiral. If the amount of people congregated in that small area is any indication, it’s working.

Here are a few photos I’d like to share with you:
Posted by Joy and Phil at 3:22 PM No comments: 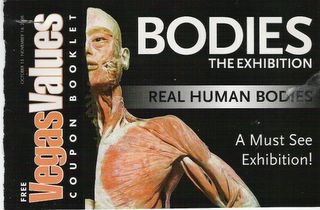 I agree! A must see exhibition. 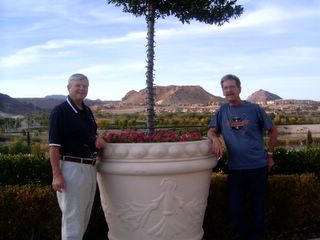 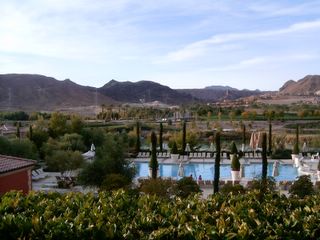 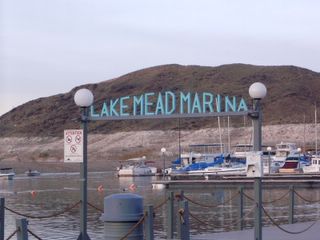 This is the new marina. It had to be relocated because of low water and the old site now sits high and dry. From the looks of the waterline, if they don't get some significant snow in the mountains, it may have to be moved again. 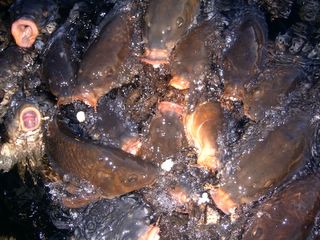 Look at those mouths! The carp were frantic trying to get to the popcorn. 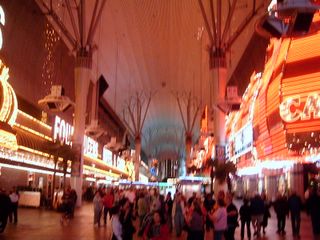 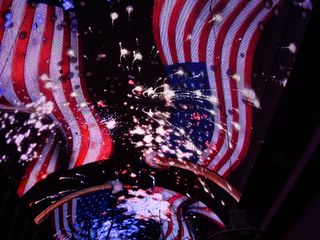 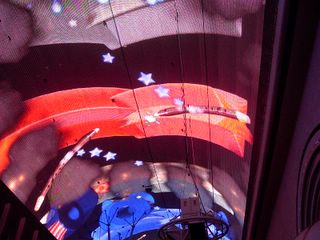 I’m sure you have all heard the latest TV hype out of Sin City? “What happens in Vegas stays in Vegas.” Well, the inference almost came true with my blog and me!

Today is the first day since we arrived in Nevada that I have felt like doing more than eating and sleeping. It was beginning to look like our stay was going to be—not only without something to tell you about but, I was going to feel too badly to tell you if we did manage to see or do anything.

With only three days left before we leave Las Vegas we finally got out and about today and drove to Boulder City and Hoover Dam. We had lunch at a tiny restaurant called Mel’s Diner and took lots of pictures of the dam. A check station was across the road just before you arrive at the dam and each vehicle was looked over by security personnel. We learned RVs are allowed to drive across but must stop and submit to an inspection first. Even though it was a short trip, by the time we got home, I was ready to call it a day.
.
Here are some miscellaneous pictures I would like to share with you. 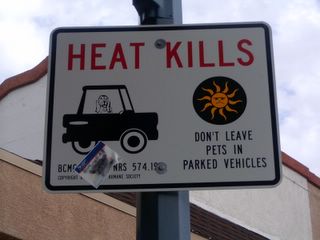 I loved Boulder City when I saw these signs posted everywhere. This has always been my pet peeve. I used to keep printed flyers in my car that said ... "What part of -- Don't leave animals in the car in the sun don't you understand?" I would drop them in the windows of vehicles with animals inside that were parked in the sun. 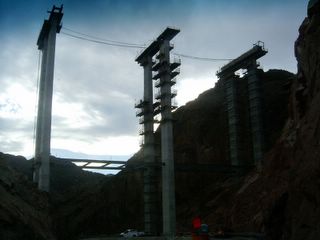 Huge supports for the new highway across the gorge due to be finished in 2008. The highway will no longer go across the dam.