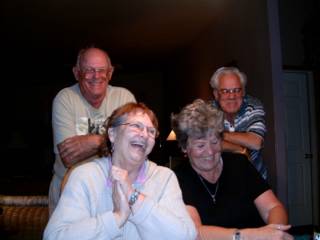 John and Don enjoying "Happy Hour" (red beer) on the patio at John and Carol's house.

View from John and Carol's driveway. White spots are homes at the lower elevation and the whole valley floor sparkles with lights at night. 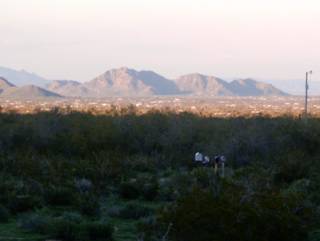 Three and a half pound navel orange at a fruit stand near Casa Grande Ruins. We bought a seedless watermelon (see them over my shoulder) for $4 and an orange, red and yellow pepper for 33 cents each. 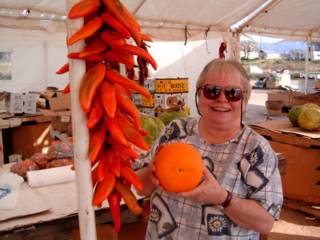 Nine stories tall, a few miles west of Casa Grande, the resort was closed in April 2003. It reopened in November 2003, after an eight million dollar renovation. 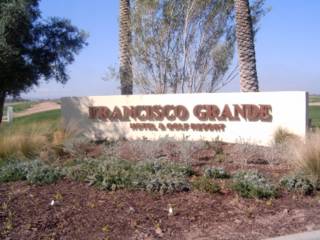 Manicured lawn and gardens surrounded by 18 hole golf course, measuring 7,400 yards on the back tees. In 1961 it was the longest layout in Arizona and one of the longest in the United States. 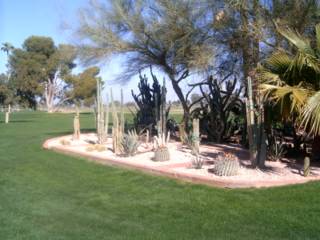 Duke's Bar in the Francisco Grand just a few miles down the road from his ranch. Wayne, his family and celebrity friends were frequent guests at the resort. 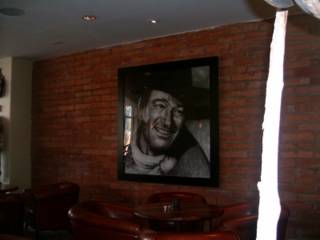 Swimming pool built in the shape of a baseball bat. 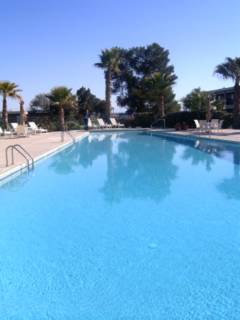 Francisco Grande Hotel and Golf resort on highway 84, built in 1961 by Horace Stoneham, owner of the San Francisco Giants as the spring training home for his team. 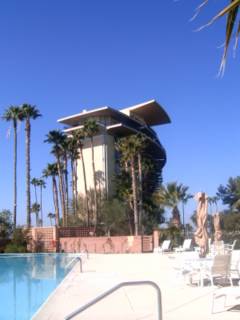 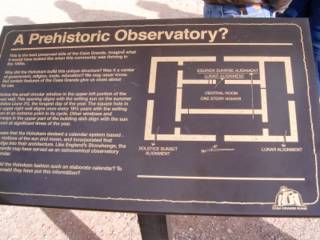 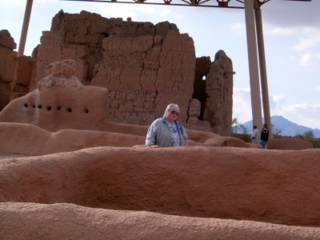 Four stories high and 60 feet long, it is the largest structure known to exist in Hohokam times. Completed prior to 1350, the classic-period Casa Grande was in use until the 1400s. In 1694 Father Eusebio Kino and his party of missionairies found an empty shell of the once flourishing village. 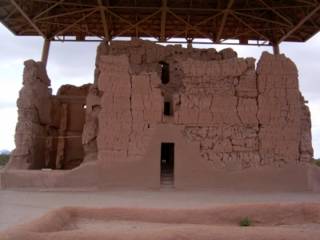 Preserving the remains of an ancient Hohokam farming village as well as the enigmatic Great House ... "Casa Grande". 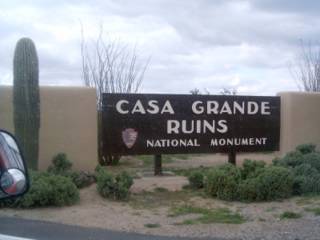 Hamburger as far as the eye can see! 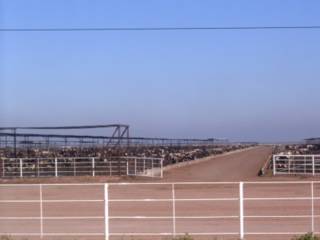 Former cattle ranch owned by John Wayne now owned by McDonald's ... yes, THAT McDonalds. Big Mac anyone? There are thousands and thousands of them in feedlots along the highway. 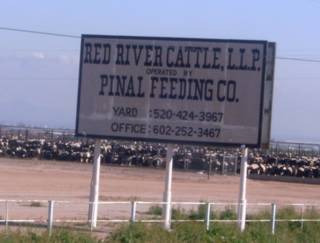 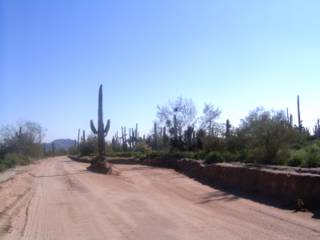 End of the rainbow ... pot of gold in our truck? Dream on! 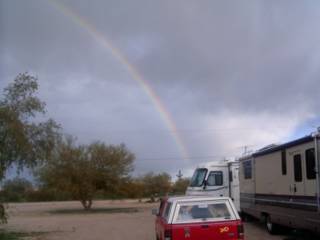 It's 40 degrees this morning here in AZ ... brrrrrr! However, the sun is up and shining brightly without a cloud in the sky so it will warm up fast. Now THIS is the ARIZONA we had envisioned. I'm up early to watch my favorite TV program, "Sunday Morning" on CBS (I've plugged that show so many times on my blog, I should be getting royalties) and as soon as Phil is up and around we'll head down the road and do some exploring. I think I hear him back there making the bed now. He has taken on that chore every day because the arthritis in my hands gives me a lot of pain when I try and manhandle our mattress in the tight quarters of our bedroom. Yes, dear readers, Phil takes good care of me (some might say he "spoils" me) and even though he occasionally receives some good natured ribbing about it from our friends, he knows I really appreciate him!
Here are some pictures of the fiberglas pole and my tyvek Blue Goose (Phil just told me I mistakenly called her a "snow" goose on the pictures ... he's looking at the blog on the laptop ... sorry, I'll fix that later) we purchased in QZ! With about a 3 foot wing span, she flutters in a soothing purr-like rhythm at the end of her tether (Sort of sounds like a playing card fastened to my bicycle tire bracket with a clothes pin ... remember that?) when there is a steady breeze. Friend, Don and I put her together from the instructions that were translated by someone who's first language is NOT English. With persistence, we figured it out while Phil attached the pole to the ladder. We decided to take her down yesterday during the big blow but will no doubt, put her back up today. The hype from the salesman intimated she could stay in one piece for about five years. I hope so because I think she's beautiful and I love her!
Don also bought a pole for the flags he had on board and soon had his up and flying as well.
The temperature has risen four degrees since I started writing ... Yes!
Posted by Joy and Phil at 9:40 AM 1 comment: 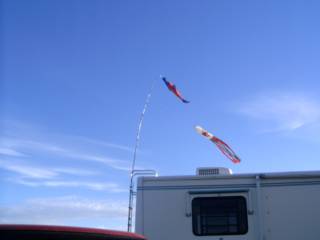 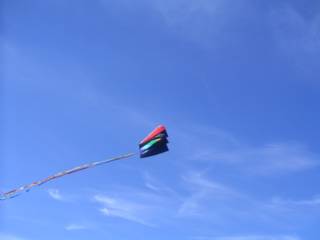 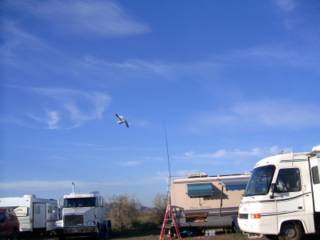 Snow Goose on the wing above our motorhome in Quartzsite. 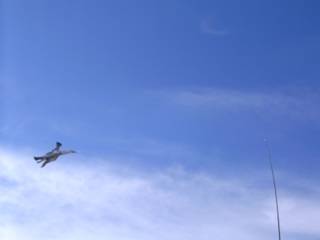 Tonight, the anchorman on the Phoenix TV station looked at his co-anchor after the weather forecast tonight and said, "Do you think our winter visitors are going to want their money back?" and Phil and I cracked up! "Yes!" we shouted in unison! We actually had FUNNEL CLOUD warnings today and experienced lightening and thunder along with major wind and a few heavy downpours. We decided to stow the Data Storm fearing it might blow off the roof or act as a lightening rod. What a day! The wind has finally died down so I'm back on line. Now, the new forecast is for five days of sun ... hooray!
Phil went over to Carol and John's house with Don and they had their hair cut this morning. One of the local ladies is a beautician and comes around once a month to gives haircuts for donations. We cooked pot roast dinner in the crock pot today and shared it with Don & Ardella tonight. Tomorrow, they are cooking chicken and noodles and we're all going to Carol and John's for dinner. I'd better come up with a contribution to the feast ... any ideas? The four of them are going to Surprise, AZ (near Phoenix) tomorrow to meet some friends at a casino (don't know which one) and have lunch. We were invited but since we don't gamble, we decided to stay home. Maybe we'll take a ride, do some exploring around Casa Grande and take a few pictures for the blog.
Posted by Joy and Phil at 9:55 PM No comments:

On Wednesday we rode into Casa Grande in D & A's Lincoln town car (lots of room for four with a big trunk). They did laundry then we went to lunch where (can you believe this?), we ran into my friend from Shelton, Shirley and her S. O., Skip, also having lunch. They are "snowbirds" and come south to Florence, AZ every winter and I had planned to call her sometime in the next week. What a great surprise! It really is a small, small world! After lunch we went grocery shopping to replenish our fresh food supply. A and D have been a good influence on us as we've been co-cooking dinner with them every night since we've been traveling together. Fortunately, we had a freezer full (we did have good intentions ... just been lazy) and a pantry filled to overflowing so we've held up our end pretty good. That night we were all pooped from shopping until we dropped so soup and sandwiches was the welcome fare. Last night, Ardella cooked a huge package of chicken pieces, picked the bones clean and made chicken tacos. Mmmmm, good! I made a fresh fruit compote as my contribution.
The team has split up today. D & A have gone off with our friends, John and Carol (also from Shelton) and we're going in to Casa Grande to do our laundry and a long list of other things that are needing to be done. Being retired "nomads" has a tendency to encourage our mañana attitude and that's not ALL bad!
Posted by Joy and Phil at 9:40 AM No comments:

Our friends, Don and Ardella leading the way on Highway 8 East. to Maricopa from Yuma. 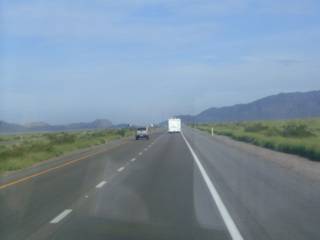 Luxurious green vegetation, thick and three ++ feet high all the way to the desert foothills, south of Highway 8 on the road to Casa Grande. 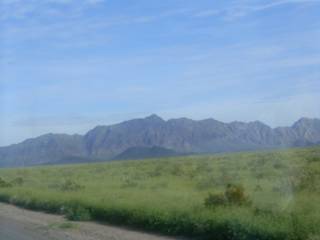