Merriam-Webster's Words of the Year 2004
Based on the online lookups, the #1 Word of the Year for 2004 was
Blog noun [short for Weblog] (1999) : a Web site that contains an online personal journal with reflections, comments.
Posted by Joy and Phil at 8:50 AM No comments:

My ancestry is dominated by farmers and this sculpture made a big impression on me. 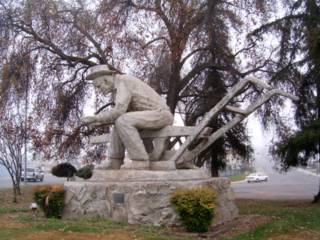 Farmer sitting on his plow holding dirt in his hands. 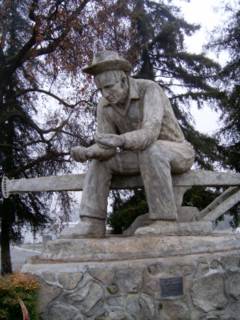 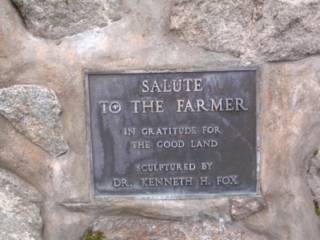 We were in Bakersfield for eight days and barely scratched the surface of things to see and do in the area. The weather left a lot to be desired but I wouldn't have wanted it too hot either so we made the best of it either by finding higher elevation or waiting until the fog burned off. One trip north on CA highway 58 to Fresno we found a wonderful restaurant in Porterville! One of 20 in a western USA chain (the first one opened is near Mt. Shasta in CA), the Black Bear Diner was a lucky find. After cruising Porterville from one end to the other, we pulled in when we realized everyone in town must be here because the parking lot was full. After a short wait, we were seated and enjoyed a wonderful meal. They have an extensive senior menu beginning at $4.50 for breakfast and topping out at $8.00 for dinner and everything on the menu is available at all times. This restaurant met all of our criteria for a "10" on the list of great stops for food in this, our great adventure. They have a website: www.blackbeardiner.com so if you're going to be on the road, check it out! I guarantee you will not be disappointed.
Posted by Joy and Phil at 7:21 AM No comments: 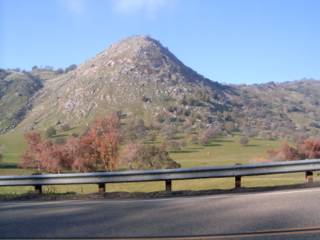 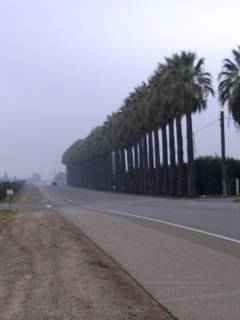 Miles and miles of orange orchards along side the highway. 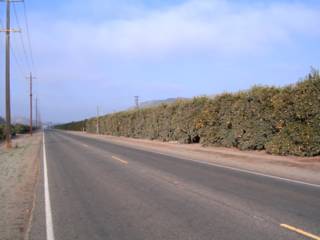 Thousands of black and white dairy cows with their heads through the fence happily munching away. 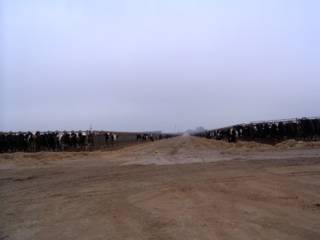 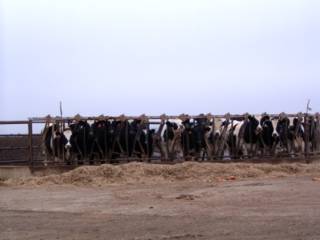 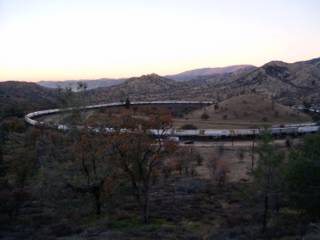 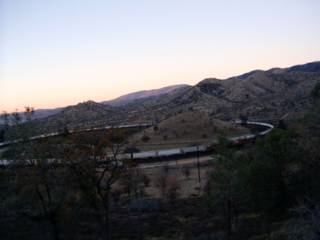 Day trip to Tehachapi from Bakersfield to see this world famous railroad loop. 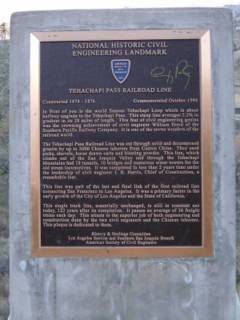 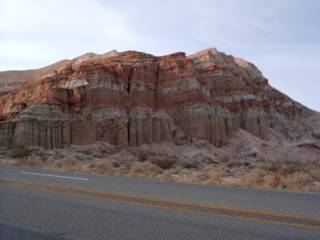 One of the thousands of Joshua Trees in the high desert. 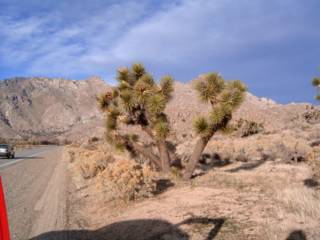 Lake Isabella at an all-time low and the town of the same name. 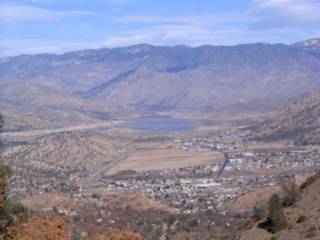 Looking back at the fog in the Bakersfield area. 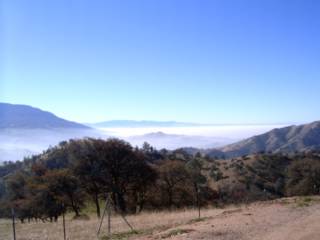 The little Ford Ranger that could ... 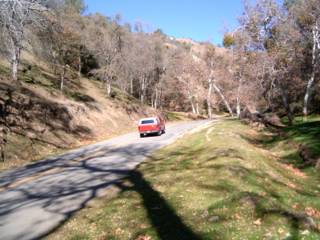 We went left at the Y but the loop to the right would have been fun too. Maybe next time! 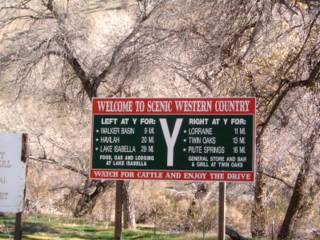 Another trip to Lake Isabella SE via Hiway 58 then north to Caliente, Havilah on Bodfish on Hiway ?? 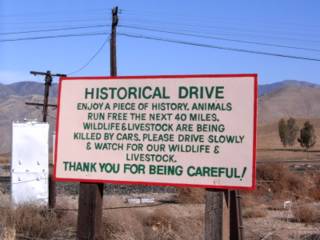 River bed in canyon along CA Highway 178 from Bakersfield to Lake Isabella. Black line is a power line and a short portion of the road is the straight line just below that. My question is how did these boulders (some as big as a house) get into the river? 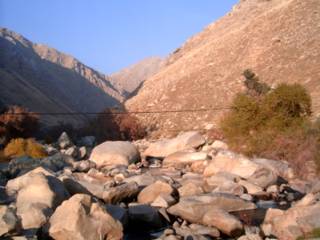 What do you do when you're driving down the road at 50 MPH and the 16' awning attached to the side of your motorhome comes unfurled? Oh yes, did I mention that the wind is gusting up to 40+ MPH outside and you're on a freeway going uphill with hardly any shoulder? We had been driving through the Algodones Dunes rubbernecking all the motorhomes boondocking in the desert when we heard the sickening sound of one side of the awning breaking loose. We had been feeling the affects of this strong wind out of the south, a phenomenon brought on by the high pressure system bringing the storm into southern CA from the north (one of the newsmen explained it but I'm not doing a very good job repeating it). Anyway, Phil had been steering into it all the way from El Cajon in order to keep us in our own lane and somehow, he managed to get most of the motorhome off the road and stopped. It was obvious once he went outside that he needed help so I put my shoes and coat on and tried to get out the door. The wind was blowing so hard I could barely get it open enough to squeeze through but I put my weight into it (ha!) and made it out. To make a long story short, we struggled with it for what seemed like an hour then without any explanation (Have you ever fought with a window blind and trying to get it to roll up when out of the blue it goes up of it's own volition?) it rolled up! When it was open and we were holding the side bars down, at times it was lifting both of us off the ground and I was so scared I was sure it was going to rip off the motorhome and take us with it! Phil used bungee cords to strap the struts together and we drove very slowly to the Grays Well reststop where Phil added additional strapping so we could continue on to Yuma. After maneauvering through the construction on the street where our RV park was located, we arrived safe and sound, exhausted but thankful to be in one piece. Now, we're waiting for the wind to stop so we can assess any damage. I'll keep you posted!
Posted by Joy and Phil at 9:21 AM No comments:

When Phil and I first started talking about selling out when he retired and moving into a motorhome full time, one thing that bothered me about the whole idea was losing a 24/7 Internet connection. I had been online for about five years at that time and had become totally addicted to e-mail and researching my genealogy on the web. Evidently, I wasn't the only person who wanted to be mobile and stay connected because as time went by, several options started to come to the surface, one of which was a very expensive satellite system. We discussed and investigated them all including using library computers, and taking a laptop to the Internet Cafe's where you could plug in for a fee. Also, some RV parks started putting in phone lines to individual sites so if there was a "local" or toll free number available you could connect with a dialup connection. Then Wi-Fi came along and started to sound like the most viable option for us. It wasn't very expensive and had the added bonus of our being able to connect from the comfort of the RV if the park had invested in the system and put up a "wireless fidelity" transmitting tower. Some were free and some places charged a fee. During all this time, one of my favorite pastimes was surfing for personal websites being written by fulltime RVers as they traveled around the county. Most of them published about once a month whenever they could find a place to go online and download their journals and all complained about the hassle except for one fellow named George, www.vagabonders-supreme.net/ who became the leader of all bloggers (people who write web logs) on a website called, Hitchitch, www.hitchitch.com because he posted daily. I was fascinated with him and his ability to stay connected and my morning wasn't complete until I'd checked in with George to see the pictures he posted each day and read his travelogue as he puttered around the western half of the USA. He was doing exactly what I wanted to do when/if we became fulltimers. He wrote about his Data Storm satellite Internet connection and the idea that it might be possible for me was born. I started my research and over time, as more and more people connected much was written about this space age technology. It would be a VERY costly option but as time passed, the price started to come down and at last, Phil and I agreed that it was going to happen for us. Early on the morning of December 15, 2004 in Bakersfield, CA the dream became a reality. We had made arrangements to meet Bill and Janet Adams, a husband-wife team of Data Storm installers. Bill's reputation in the RV world is that he is the "best" and in just a few hours, he and Janet with flawless teamwork, worked their magic. In less than one day, Phil and I were presented with our own personal Data Storm two-way satellite receiver/transmitter aimed at the Southern sky allowing us to be online 24/7 on either or both computers. We've had a couple glitches to work out as Phil and I learn how to operate the system (and Bill is available by cell phone to walk us through it) but for the most part it has been totally painless. Even though Phil is less addicted than I am, we both love it!
Posted by Joy and Phil at 7:45 PM 1 comment: 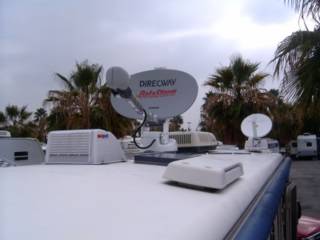 Looks like a bowl of spaghetti in here ... before velcro and wire-ties made sense of the modem, router and Moto Sat (the box that controls the antenna). 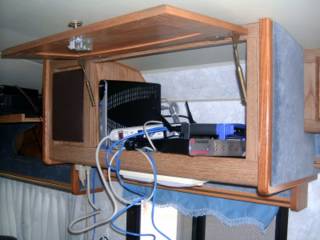 Looking for the satellite through the palm tree fronds. 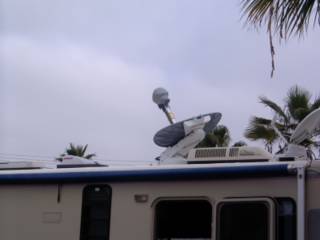 Janet and Bill discussing a finer point of installation. 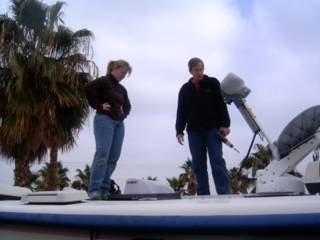 The van that Bill tows behind his Prevost with satellite dish storage on top. 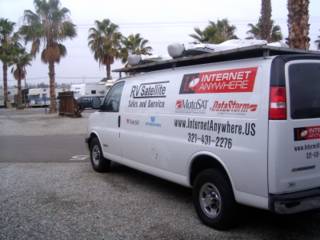 This 1988 Prevost is the home of Bill and Janet Adams, Data Storm installers. Beautiful coach! See their satellite dish on top? 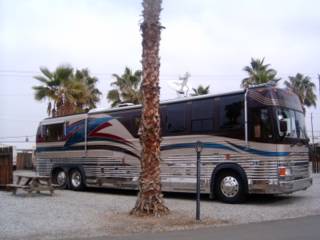